What is black mould and what health problems can it cause?

The fungi are common in homes, with babies and young children most at risk from potential dangers.

Mould is very common in homes. It can grow on tiles, fabrics, carpets, wood and other materials when moisture is present. Key spots are around window frames, in bathrooms, anywhere condensation forms, and where leaks and rising damp lead to moist patches on ceilings and walls. Two black moulds commonly found in homes are Cladosporium and Alternaria fungi. Another black mould is Stachybotrys chartarum, which can release specific toxins that are harmful to humans. 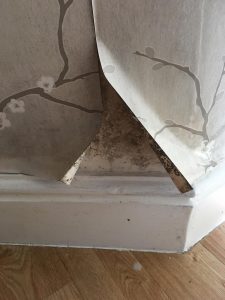 What health problems does black mould cause?

Damp and mouldy environments in general can cause a host of medical problems, particularly in people who are sensitive to the allergens that moulds produce. Common ailments are sneezing, a runny nose, red eyes and skin rashes, but moulds can also affect the immune system and trigger more serious problems such as asthma attacks. Cladosporium and Alternaria can provoke severe, and even fatal, asthma attacks, and long-term exposure exacerbates the risk. Stachybotrys chartarum causes sick building syndrome, where toxins released by the fungus cause people to feel unwell. The fungus has also been associated with a potentially lethal condition called acute idiopathic pulmonary haemorrhage in infants, but a firm link has not been established. 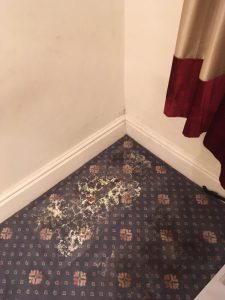 Who is most vulnerable?

Babies and young children are at particular risk of health effects from mould, not least because of their small airways. Those with respiratory conditions, such as asthma and certain allergies, tend to be worse affected, as are people with skin conditions, such as atopic eczema, and those with weakened immune systems. A weaker immune system leaves people more vulnerable to fungal infections from spores breathed into the lungs.

How should mould be treated?

Buildings should be routinely inspected for water damage and mould. Any source of moisture needs to be dealt with by fixing leaks and dampness, controlling humidity, cleaning and drying up any flooded areas and ensuring good ventilation. Keeping homes warm and well-ventilated helps because mould thrives in cooler, damp conditions. Small amounts of mould can be dealt with relatively easily, but when mould is growing in carpets, ceiling tiles and on walls, professional services are often needed to remove the contaminated material. Painting over mould is not likely to be effective.

If you have been affected by any of the issues raised in this article, contact us for assistance on 0161 348 7670.